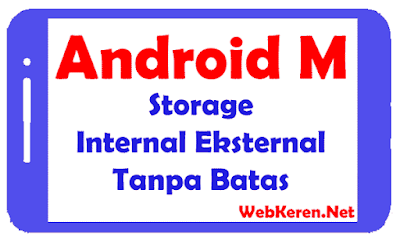 Goodbye Root and Memory Swap. Yes, indeed this feature has actually been "breached" by the developers of "oprekers" on the previous version of Android, namely by making memory swaps, which allow the Android external storage media to be read by the system as an internal storage media as well. But to do so the user must rooting the Android system, which in many cases results in the loss of the warranty.

On the Android M application (along with data settings in it) and personal data can move freely between the device's internal storage and "adopt" an external storage source. In other words, through the Adoptable Storage Device feature, you don't need to worry about the limited internal memory capacity.

In addition, my friend also does not need to worry about data security, because the storage device is adopted with a protected layer of encryption for security reasons. This Adoptable Storage Device feature supports both microSD cards and USB OTG drives.

That's the explanation of WebKeren.Net entitled On Android M, Unlimited External Internal Storage! Write your friends in the comments column.