Google Drive is on all android smartphones. Yes, multiplatform software that can be used on almost all PC computers, laptops and cellular phones (cell phones) is indeed one of the best reliable cloud service providers. Google Drive has even become more popular lately with the leaked manuscripts of questions and answer keys for the 2015 SMP SMP distributed through Google Drive. 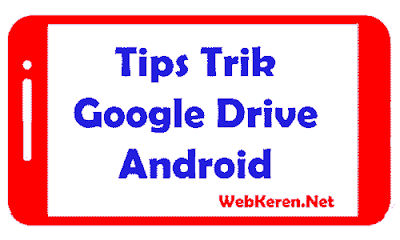 Besides it is already inherent (as bloatware / application default default) in the Android smartphone sales package, Google's cloud storage service is also a cool, sophisticated, most useful and important application in the rapid advancement of storage in the internet age. It overcomes the limitations of the small cell memory and also the data accessibility of all devices. Just upload the files you want to backup in the cloud, and download or even edit them directly online or offline when needed.

Also read: The Best Fastest and Most Popular Free Cloud Storage of 2015

To be able to further maximize the use of Google Drive for Android, here are some Google Drive Tips and Tricks that WebKeren.Net takes from the AndroidPit site. The goal is clear, which is to facilitate the use and maximize all available features.

1. Add Pictures from the Camera Directly or from the Gallery

Now you can insert images into Google Drive documents (Google Docs) directly from the gallery or from the camera directly.

After a long wait, finally on the latest update of Google Drive for Android added a feature to add images / photos to Google Drive documents directly from the phone gallery or from the camera directly. This makes you more creative with the things that are being done in Google Drive.

Here is how to do it:

The function of Google Drive is primarily as a cloud storage service, which is useful for reducing the burden on mobile phones with files stored locally using internal storage. But there are some important files that might be worth keeping offline on your device. If, for example, you want to work (edit or open) the document when you're offline or have trouble getting an internet network, and then synchronize again online when you connect to the internet again.

3. Send the drive document through Gmail

In addition to sharing documents directly from Google Drive, you can also do it using the Gmail application for Android. The way to do this is:

If you are constantly editing Google Drive documents and collaborating with others, it is very important to be able to see documentation about who has made the changes and when. To track Google Drive document editing activities, just press the menu icon at the top right, then choose details.

Auto-backup photos have been available for a long time on Google "Photos", but now they can also be accessed from Google Drive.

Since March 2015, if you use the 'auto-backup' feature in the Google Photos Application called "Photos", it also makes these photos viewable on Google Drive.

The trick, navigate to the Google Photos application (called 'Photos'), then select active if previously auto-backup is set to off. As soon as auto-backup is turned on, your smartphone will start syncing photos to Google Drive.

All photos that you take automatically sync to your Google Drive account, and can be viewed on devices that have Google Drive installed. To see it in Google Drive, press the "hamburger icon" to open the menu panel on the left side of Google Drive and select / press Google Photos.

You can also make auto-backup settings by pressing the menu button at the top right of Google Photos >> select Settings >> Auto-Backup will then be switched to backup settings.

Do you also have Google Drive tips and tricks for Android? Notify by writing it in the comments.