Maybe some of my friends consider this article useless, because indeed at first glance there is no significant difference between right and left earphones. Especially if the physical is indeed symmetrical which will still be comfortable to use if the right and left are switched. But apparently, if you pay close attention, you will find that the difference between left and right determines the best sound quality.

On well-known brand earphones, my friend will also find 3 small vertical points that can be touched. The three dots are the letter L in the braille alphabet, so it is easy for the blind to distinguish between the left and right side of the earphone. 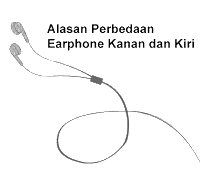 Many earphones or earbuds have a non-symmetrical layout, which is intended to fit the shape of the ear or head and can be "attached" perfectly. But there are also symmetrical headphones (for example the default iPod mini speaker, Etymotic and Shure noise-canceling earbuds, and many headsets) are completely symmetrical, and the L / R has no impact on the physical fit of the ear.

However, even though the earphone is physically symmetrical, there is a difference between L and R. There is a significant difference in the sound emitted between Left and Right if the music or film that is playing uses stereo technology.

This is because musicians and filmmakers will use stereo sound channel effects that are aimed at one or the other ear. If you watch a movie using Heaphones the wrong way, you might quickly feel that something is 'wrong': a car appears from the left on the screen, but the sound is coming from the opposite direction.

Indeed this does not happen to all music and movies, such as normal pop music which rarely makes any difference, and my friend will not feel the difference at all when placing earphones in the 'wrong' ear. As written on Wikipedia about sound stereophonic:

Most of the two-channel recordings that use stereo recording are only in (a) weak feeling. Pop music, in particular, is usually recorded using the technique of close mic, which artificially separates the signal into several songs. Separate tracks are then mixed into two-channel recordings which are often subject to little or no resemblance to the actual physical and spatial relationships of the musicians at the time of the original performance. Indeed, it is not uncommon for different tracks of the same song to be recorded at different times, and even in different studios, and then mixed into the recording of the two final channels for commercial releases. Classical music recordings are an exception.

To prove it, or you want to check whether the right and left are in accordance with what they should, you can listen to the following video.

When listening to stereo music, different sound waves will be issued through each audio channel. For a good reproduction of original music, you want every ear to listen to the correct channel. This is very important for recording live, where the recording engineers will try to place the instruments on the "stage" produced by stereo recordings in a way that matches the instruments and musicians placed on the physical stage.

This is mostly related to the perception of instruments, sounds or sounds that you listen to. When recording live bands (or even orchestras) they pan instruments to match where they are physically on the stage (ie left-side stage, left channel). It also provides an accurate reproduction of live recordings when heard.

At this point WebKeren.Net article about the Reasons for Differences in Right and Left Earphones. What do you think friend? Write in the comment box to share opinions.

Also read: Reasons Why Long Earphones Are Next
Source: Quora